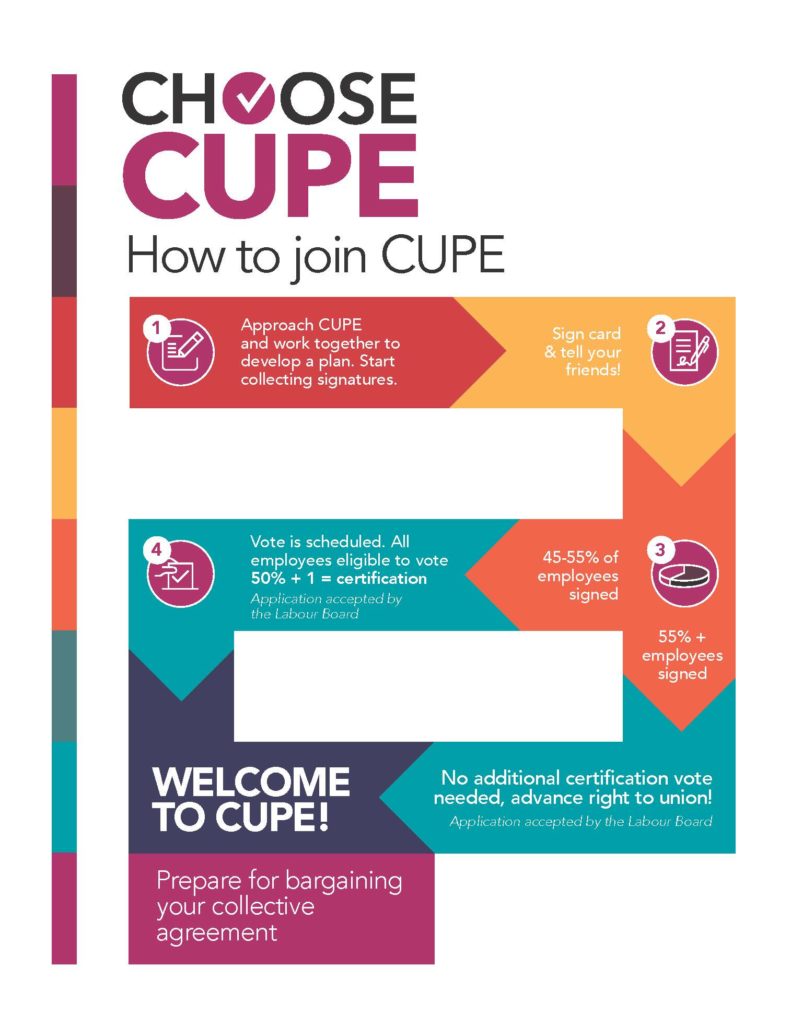 What is a union?

A union is an organized group of workers who come together to make decisions about the conditions of their work. The main goal of a union is to ensure workers have a collective say over their working conditions.

Unions are structures for economic democracy in the workplace and they come in many different configurations and sizes.

In every province, workers have the right to join a union and choose a union to represent them when dealing with their employer. In choosing CUPE, workers join a union where the members are in charge: each CUPE local decides its priorities for bargaining, when to settle a new contract, and how to manage funds. CUPE’s strength comes from individual members working toward common goals. Together we maintain and improve wages and benefits, improve health and safety conditions, and make workplaces better.

What is a local?

Workers who have successfully organized their workplace and join CUPE are brought together under a single democratic structure called a “local”. Local unions in CUPE have democratic control over their activities. Members of the local union decide, at regular membership meetings, on issues that are important to the local and the membership. The local union itself is run by elected members of the local union. Each CUPE local decides its priorities for bargaining, when to settle a new contract, and how to manage funds.

With 700,000 members and growing, CUPE is made up of thousands of locals throughout Canada.

As a strong and democratic union, CUPE is committed to improving the quality of life for workers in Canada. For the last 50 years, employees have been working together to form local unions and have collectively built CUPE into what it is today.

What is a collective agreement?

As members of a union, you will negotiate a legally binding contract, or collective agreement, with your employer that contains the terms and conditions of employment. Some examples of what would be included in the collective agreement are wages, benefits, hours of work, vacation and holidays, seniority, how to handle disagreements, health and wellness, accommodations, and hiring and layoff procedures. Your collective agreement ensures predictability, equal treatment for all, a clear process for accountability, as well as a dispute resolution if the agreement is violated.

What can we gain from union representation?

Above all, we will work with you to negotiate a collective agreement that reflects the nature of your work and stipulates the terms and conditions that must be respected by your employer. Arbitrary decisions and actions by an employer will not be permitted with respect to the contents of the negotiated collective agreement. You will have a collective voice and be able to make democratic decisions about your workplace. Being a CUPE member means you have the materials, information, programs, and the staff expertise needed to meet the employer on equal terms.

What does it mean to sign a union card? Is there a cost?

Signing a card means you are applying for membership in CUPE and it indicates to the Labour Relations Board that you support a union being formed in the workplace. There is no cost to sign.

Can I lose my job for supporting the Union?

No. An employer cannot dismiss or discipline an employee for supporting a union’s efforts to organize the workplace. In fact, if an employer tried to discipline the employee, the union can file an unfair labour practice complaint at the Labour Relations Board on the employee’s behalf.

Will my employer find out if I signed a Union membership card?

No. Employers are not entitled to know who did or did not sign a card. The Labour Relations Board does not tell the employer the names of the employees who sign membership cards.

What can’t my employer do while we’re joining a union?

The employer can’t do anything that could interfere with the right of employees to join a union or have union representation.

Can my employer talk to me about the application for union certification?

Yes, as long as they do not use any form of intimidation that could reasonably have the effect of forcing or urging a person to become, or reject becoming, a member of a trade union.

I’ve been told that unions can’t improve my working conditions – is that true?

A union will certainly improve your working conditions by bargaining for things such as: predictable schedules, protection from being fired without reason, fair and transparent workplace policies that apply to everyone, and enhanced wages and benefits. In addition, some of the minimum benefits you now receive from your employer are a result of people like you working together through unions over the last 100 years: benefits such as the weekend, right to pensions, vacations, minimum wage laws, human rights legislation, and health and safety regulations.

Learn more about CUPE in your sector: